Why are tubs still popular in the peloton?

With superfast, reliable clinchers and tubeless tyres available on the market, why are the professionals still racing on tubular (glue on) tyres? Words by Shelley Childs

As the advert suggests, a large majority of professional road teams race on tubulars, either from Continental or other brands. This suggests that the professional scene is somewhat biased towards this type of tyre system, which is also out of kilter with the buying trends of the general cycling public.

In the road racing, time trial, triathlon and Ironman markets, and pretty much any other competitive road & track discipline of the sport, tubulars continue to be bought in impressive numbers, by race enthusiasts from 4th Category levels up to the likes of Team SKY.

Recent studies have even proven, in the laboratory at least, that clincher tyres (tyre & tube which cling to a hook type bead, which are the standard wheel systems for almost all complete road bikes at point of purchase) roll faster than 'tubs'. Many brands now offer clinchers that weigh less than 200 grams, and a tube that can weigh as little as 45g, meaning a combined weight of less than any road tubular available on the market.

We asked a spread of riders at a Tour Series race (UK televised city centre racing) as to why they preferred tubs. Answers varied from increased cornering speed to pure faith in the product. An argument could be made that our clincher tyres also feature the great BlackChili grip that is also found in the Continental tubulars, but the riders go further to explain that the whole tyre system just feels more secure under extreme cornering than other systems and other tyre brands.

Despite a tubular tyre possibly being slightly heavier than a clincher, the rim will actually be lighter due to the different construction needed to accomodate tubs. So how does a rider with a bike featuring clincher tyres convert to tubular?

Firstly, a new wheelset is the order of the day. As mentioned above, the rim bed is completely different to that of a clincher rim with its crotchet rim walls to which the tyre bead 'clings' to once inflated. A tubular or 'sprint' rim is smooth and ever so slightly inverted. This rim bed is plied with rim cement, as is the underside of the tubular tyre when it's time to attach the tyre, and a whole lot of stretching and pulling is usually required. With the brute force part of proceedings done, the rim is then left for 24 hours until the cement dries and a safe seal is made. Notice how most race team mechanics look pretty big & strong. This is almost solely down to the hours spent fitting tubulars during their careers rather than the extra calories they expend whilst tucking into rider musettes whilst the soigneur isn't looking.
See our 'How to' tub fitting video here.

Once your tubular is on the rim and dry, your wheelset is safe to use. Sometimes, slight adjustment of your brake blocks are needed as sprint rims can sometimes come up slightly undersize in comparison to 700c clincher rims.

You have now made a nice upgrade to your machine, meaning an extra 'Sunday best' set of wheels for racing and special occasions when all your marginal gains are brought to the fore in the secret battle against your peers. 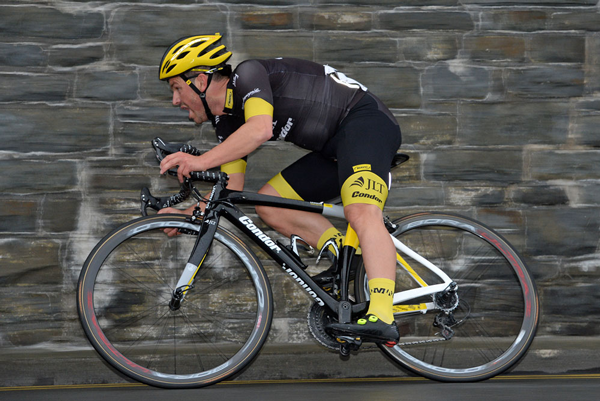 Another benefit to tubulars is that they can be ridden flat. This is something that is impossible with clincher tyres on safety grounds. The rim of clincher wheel & tyre system will be exposed to the road, such is the way in which a flat clicher behaves when ridden in this way, meaning an equation of metal + asphalt = get down... Whist it is also an acquired riding technique, a glued tubular will still hold to the rim when flat, and so a rubber layer is always present between the rim and the road and so a level of grip is maintained.

Famously, Abraham Olano rode to vistory in the 1995 World Professional Road Race Championships with a flat rear tubular. This would probably not have been the case had he had a front flat, but the message is clear; tubulars are a benefit in road racing scenarios.

The downside to the average rider is that a flat tub out on the road will still need changing (prolonged riding on a flat could damage your rim, especially a carbon rim). Changing tubs can be difficult and needs sufficient practice. Getting the old tub off in mid-winter is not much fun, and carrying a pre-glued spare can also be cumbersome, although they can pack down and be placed in the spare bottle or under the saddle.

We'd suggest that tubulars are not completely ruled out by the average sportive / leisure cyclist who takes pride in their performance road bike. We wouldn't suggest selling your clincher set of wheels and replace them with sprints, but as a second set, especially if you are thinking of trying out racing or have a mega sportive goal in your plans, then learn some more about tubulars and how to fit & replace them. You'll then enter a whole new old world which started way before the first event Tour de France in 1903 and is still strong today.